Update 4-12-2021:  Sometime after this original blog post, Georgia Legislature capped the income exclusion at $35,000 if you’re 62-64.  Age 65 and older, the exemption rises to $65,000.  If a couple qualifies for both, I understand the total exclusion is $65,000 (of qualified income…excluding pensions and other income sources), but I don’t think they qualify for two $65,000 exemptions.  Consult your tax professional for actual exclusion application.

Update 2-18-2016: As of the 2016 tax year, all pensions and other retirement income will be exempt from Georgia income taxes 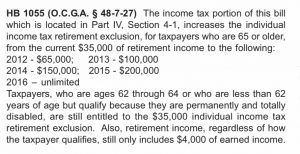 Evidently, under current law, seniors who were 62 or older could exclude up to $35K of income before being levied Georgia income tax.

So what about those who are 62-65?  Are they under the current law and still have to pay Georgia income taxes over $35,000 annual income?  Maybe!

References to products and services are not a specific endorsement, but the user must perform their due diligence and investigate whether the product or service is right for them. I welcome any or all comments that would help others.

This entry was posted in Uncategorized. Bookmark the permalink.